Here is a link to a very important article about canine heat stroke on PetMD.


Posted by detroit dog No comments:

Hello all. It's been quite a long time since I've posted. I've missed you and hope you all are doing well (though I see that it's been a long time, too, since you've blogged). Nonetheless....

I'm writing about our good boy Quasar, 14 years and 9 months old as of July 4.

Quasar was diagnosed March 15 with osteosarcoma in his right distal radius (right foreleg). We had noticed him limping when he ran out to greet my husband at the car when he came home from work. We gave him some leftover Rimadyl for a week, but it didn't stop the limping so we took him to our longtime vet. She thought it best to x-ray his leg given his age and that he's a long-legged dog. The X-ray showed osteosarcoma. Me being me, I asked for a consult with a specialist just to be sure. She suggested a specialist practice that is locally owned and I made an appointment there and we saw an oncologist who confirmed the diagnosis.

Interestingly, the oncologist is one of several vets in the U.S. who practices both conventional and traditional Chinese veterinary medicine. Again, given his age, we decided on palliative care. Radiation therapy is supposed to work great for pain, but it can deteriorate the bone so we decided against that. Instead, we decided to treat Quasar's pain with daily doses of Rimadyl (carprofen) and Gabapentin, and a powdered mix of Chinese plants and herbs. To treat both his pain and to strengthen the bone, he is getting injections of Zoledronate every 3 to 4 weeks. (Zoledronate is akin to "Boniva" treatments for people with osteoporosis.) To treat the tumor, he is also getting a powdered Chinese mix of plants/herbs; this is expected to shrink the vessels that feed the tumor and slow its growth, and we have no expectation that it is curative. We brought up the subject of CBD oil with our vet and she perked right up! Veterinarians are not allowed to prescribe CBD (here in the U.S.), but since we asked she told us which one to get (actually a concentrated hemp CBD for oral use) and where to get it. Again, this CBD is strictly for palliative purpose.

Quasar sees the oncologist every 3 or 4 weeks, and saw her a couple of days ago. His liver enzymes were a bit higher than his last visit, so we decided to put him on daily doses of "Hepato Support" (main ingredient is milk thistle).

Quasar is doing Greyt! His vet said most dogs with osteosarcoma at 3 months have difficulty walking if they are able to walk. We are so happy that Quasar still has a Greyt quality of life (except for when we don't give him as many treats as he wants!). We hope he sees his his 15th birthday in October.

I would love to hear from others that are using "alternative" treatments.

I've attached a couple photos of his leg and video of him from earlier this month. (Excuse our yard.) 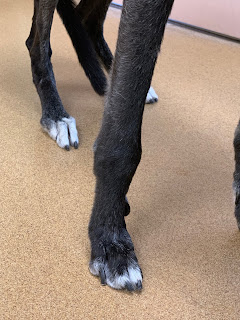 Posted by detroit dog No comments: This is a photo of our foster dog Sam.

We've had Sam for about a month. He is so gentle and quiet and sweet, and rambunctious when it comes to seeing a leash or "Mom" or "Dad" coming home. He's big, too! 80 pounds! Interested in adopting? He is a foster dog with ReGAP here in southeast Michigan.

Last week Sam bit Quasar, kind of shredding his ear. They were doing that dog dance where they both get worked up over a passing dog, then spin in circles and growl and snap at each other. Sam's snap connected with Quasar's ear. However, I think this was provoked by Mr. Q.

Quasar's ear wouldn't stop bleeding after an hour (ear is filled with veins!) so we took him down the street to the emergency vet. WHOA! The vet wanted $622.00 for Plan A. umm, show me Plan B. That was just under $400. So I said, I'll pay the office visit and the antibiotic -- $150 and twice what our vet would charge. Luckily I had some Tramadol (pain med) left over from Star's illness.

So we returned home and spent hours trying to stop the bleeding and finally got Quasar's ear bandaged and gave him the antibiotic. The next morning we were able to remove the bandage and flush it out with water, hydrogen peroxide, then a final flush with the antiseptic Chlorhexiderm. Then bandaged again. It's been almost a week, and we've done a lot of cleaning, bandaging, giving Tramadol and antibiotic. Mr. Q is recovering, but he still yelps if we touch his ears.

So there went our long weekend away.... We didn't want to bloody up where we'd be staying.

Sam really is a sweetheart. 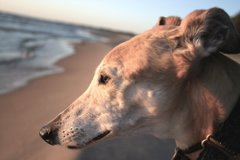 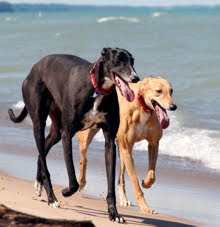 The Dog House blog is a personal blog - neither professional nor expert (except in my own mind). detroit dog likes to read and to research - and 'technical' information presented is a result of both. any seeming advice given is taken at your risk.